The History and Overview of Cycling

For many people, riding a bicycle was something they did as a kid, but it’s not something they did much of once they got into their teen years. For some, it’s because they got a car and could drive places instead of a bike. For others, it’s because they live in an area where bicycling isn’t an option—those out in rural areas with unpaved roads may not always be able to bike places. But with new inventions such as the electric bike and bicycles that are safer, more and more people are turning to bikes as a way of saving money and going green.

The History of Cycling

Bicycling was first introduced in the 1800s, and it quickly became very popular. However, the basic bicycle design can be traced back to 1493, when Gian Giacomo Caprotti sketched out the idea. Another version was built in France in 1791. However, what many people consider the first practical bicycle was created in 1817 by Karl von Drais, a German civil servant.

In 1868, the first documented bicycle race was held. Bikers racked 1,200 meters in the Park of Saint-Cloud in Paris.

In the U.S., bicycles were incredibly popular in the early 1900s. The oldest bicycle racing club, the St. Louis Cycling Club, was established in 1887 and continues to host races and other events today. However, by 1920, the practice of cycling quickly died out because of the automobile and the growth of larger suburbs. In Europe, cycling continued to go strong until the 1950s.

Today, though, more and more people are biking to work as a way of saving on gas, getting exercise, and because it’s fun.

Wikipedia: The History of Cycling – Brief history of the sport

History of the Bicycle – Where and how it was created

Cycling Timeline – Quick history of the bicycle and cycling

Fun Facts about the Bike – Including some historic information

Bicycle Museums – List of different museums around the world

The bicycle has undergone many improvements over the years. The bicycle created by Baron Karl von Drais, originally called a the 'draisienne' (which was also known as 'Velocipede', 'Laufmachine', or 'running machine') was similar in design to today’s bike, but it was very, very basic. It was made completely from wood, for example, and it was pushed with the feet instead of pedaled. Pedals weren’t added until 1865 when Ernest Michaux of France modified the bike to include them. This mode, the Michaudine, didn’t use gears, but the front wheel was increased so that the bike traveled farther with each pedal. Two years later, Michaux added brakes to his bike so that it was easier to stop. Chains and gears were added in the 1870s, making it possible to go faster with less effort.

By the end of the 19th century, the bicycle had evolved into what we know it as today. While improvements have been made since then, they’ve mostly been in the materials used in bike building. However, the e-bike, or electric bicycle, has marked a major change in the biking industry. It’s almost like a motorcycle—a small electric motor powers the bike, making it much easier to cycle to work. However, those who ride for fitness or want to compete in races won’t want this type of bike.

Improving the Bicycle – The history of bike improvements

Technology: Improvements in the Bicycle – Highlights of how bikes have evolved

Getting started in cycling is very easy. All you need to do is own a bike and know how to ride it. Of course, you’ll need safety equipment such as a helmet and, if you’re riding at night, reflective clothing. There are many different bikes out there, so be sure you get one that’s right for you. There are bikes built for racing, off-road riding, and daily cycling, and each is slightly different. Street bikes usually have thinner tires, while off-road mountain bikes have tires that are designed to handle rocks and other debris without puncturing.

Once you’ve started cycling, you can either do it on your own, with a few friends, or you can join a cycling group. Look in your local paper, in biking magazines, or online to see if there’s a cycling club in your area.

Choosing a Bicycle – List of the different types of bikes 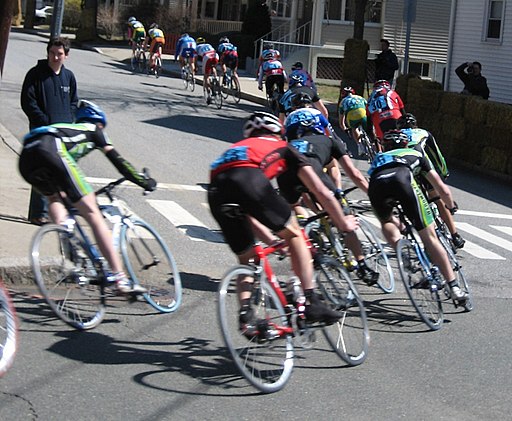 There are several different types of cycling events you can participate in, including races and competitions. You can find out about these events in several different ways. If you’re part of a cycling group, you’ll probably hear about events from your fellow group members. You can also look online, read about upcoming events in your local newspaper, and read cycling magazines. For most of these events, all you have to do is register, pay any entrance fee, and show up. Some don’t even require registration and are free.

There are thousands of bicycle races held every year around the world. Some of these are small local races, while others are major multi-stage events such as the Tour de France. Many of these races are held to raise money for different charities, while others are held to determine the best cyclist in the city, state, country, or, in the case of the Olympics, the world.

The races that make up the Grand Tours are the most well-known: the Tour de France, Vuelta an Espana, and the Giro d’Italia. These three races are all held in Europe, and they’re all considered very important races to those in the cycling world. However, most non-cyclists have only heard of the Tour de France. It is the oldest and most famous bicycle race. It was first held in 1903, and it was organized as an attempt to increase sales of the L’Auto magazine. It’s been held every year with the exceptions of 1915 – 1919 (World War I) and 1940 – 1947 (World War II).

There are many cycling events in the Olympics, too. There are events in mountain biking, road cycling, and track cycling. All in all, more than a dozen gold medals are handed out to cyclists at the summer Olympic games.

Find US Biking Events – Lists many different races and events

In addition to races, there are some different cycling events you can participate in. Some of these events include bike rides. Similar to motorcycle runs, these events involve riding your bike to a certain destination or stopping at specific points along a route to pick up a ticket, get a stamp, or even take a picture of something. There are both street races and off-road races for those who ride mountain bikes.

For those who aren’t into racing, there are events centered around doing bicycle tricks. These types of events are usually a part of extreme sports competitions. Bikers fly off ramps, do flips, spins, and more. The types of bikes used in these events are different from racing bikes in a few ways. The tires are usually similar to those found on mountain bikes because they have to be able to absorb the impact of the bike falling from a good distance.

Active.com – A website that lists many local cycling events

Find a Cycling Club – Search for clubs in the U.S.